Popular
Is 5000 IU of Vitamin D Enough?
How to Boost Your Stamina and Endurance (And...
Biomanix Review – Premium Male Enhancement At Its...
What causes penile numbness and how to treat...
Why Do We Sweat?
7 Reasons Why You Should Exercise Out in...
Here’s how cannabis can improve your sex life
7 Reasons Why You Should Probably Eat More...
Male Ultracore Review – Is it worth buying?
What is Chlamydia?
Home » Considering Testosterone Replacement Therapy? Here’s What You Need to Know
Health

Considering Testosterone Replacement Therapy? Here’s What You Need to Know

So you’ve finally hit your 40s. You’re still in great shape, your career is going very well, and you’re probably making more money than ever. You might even be married and have a family. Everything is fine and dandy until you open up your social media newsfeed and see ads for low testosterone therapy everywhere. And maybe you realize that you’ve been feeling a little more tired after work lately or that your orgasms lately haven’t been as intense as they used to be. So you might start to wonder: Is your testosterone level high enough?

Pharmaceutical and supplement companies seem to have hit a nerve among men in their 40s and above. An estimated 5.6 million men are taking testosterone supplements, and the industry is showing no signs of slowing down anytime soon. So if you think you should talk to your doctor about getting testosterone replacement therapy, read on to find out what you should know.

Testosterone is a 19-carbon sex hormone and anabolic steroid that is primarily called the “male hormone” since it is responsible for what makes men, well, men. Although both men and women produce testosterone, it is produced in significantly higher levels in men than in women. Other than being essential for sperm production, testosterone is a key player in the regulation of physiological, emotional, and mental functions in humans. The physiological effects of testosterone are especially apparent once a man enters puberty, as he will start to develop male secondary sexual characteristics like facial hair, deep voice, high muscle mass, and lower body fat.

Testosterone’s powerful psychological benefits include high self-confidence, cognitive abilities, and tolerance for risk, all of which can make a man more attractive to women. Unfortunately, testosterone is also blamed for some of the so-called “bad behavior” in men, including aggression, extreme competitiveness, and desire for dominance and power. 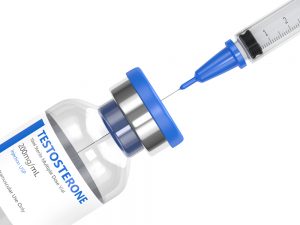 In addition to the benefits described above, optimal testosterone levels have also been shown to be indispensable for the prevention of osteoporosis and other bone complications, particularly in elderly men. The bioavailability of testosterone is influenced by the level of sex hormone-binding globulin (SHBG), a glycoprotein that binds to the sex hormone and circulates it throughout the body via your bloodstream. In younger men, there appears to be a positive relationship between bone mass and SHBG levels, reflecting their higher testosterone levels. However, as men age, increases in SHBG levels do not accompany increases in testosterone levels; the decreasing testosterone levels in turn negatively affect men’s bone health, resulting in increased bone turnover, loss of bone mass, and increased risk of bone fracture.

How Testosterone is Produced

A whopping 95% of testosterone is made in the gonads – a.k.a. testes in men – but a small percentage is also made in the adrenal glands by converting dehydroepiandrosterone. You may not have realized it, but the production of testosterone actually starts in your brain. When there is a low level of testosterone in the blood, the hypothalamus, a region in the front part of your brain, releases a type of hormone called gonadotropin-releasing hormone (GnRH). GnRH then stimulates the anterior pituitary gland to release luteinizing hormone (LH) and follicle-stimulating hormone (FSH). Both LH and FSH travel to the testicles, where they work together to stimulate testosterone and subsequent sperm production.

As the blood levels of testosterone increases, a signal is sent to the hypothalamus to suppress GnRH secretion, which in turn will suppress LH and FSH production in the pituitary gland. This phenomenon is referred to as a negative feedback mechanism.

It’s common knowledge that testosterone levels start to decline around age 40. Along with physical changes that can occur with naturally declining levels of testosterone, aging men also often experience changes in their emotions and sexual functions. This may include erectile dysfunction, low libido, depression, fatigue, low self-confidence, and hot flashes. These changes can encourage men to search for methods – a.k.a. a fountain of youth – that will return some of their virility. A commonly prescribed method to raise testosterone levels is testosterone replacement therapy, which can come in the form of a skin patch, gel, mouth patch, injections, or implants.

Pharmaceutical companies spend millions of dollars yearly promising men that they will be able to wind back the clock 10 or 15 years, to the days of peak manliness. While some men may claim that they have more energy or increased libido when they’re on the treatments, the truth is that few men experience immediate side-effects from testosterone supplementation, and much of the effects from long-term use are still 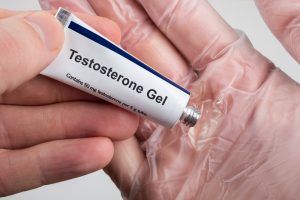 unknown. Some short-term side effects include:

While that may seem like minor side-effects in exchange for potentially great benefits, like many medications or supplements, testosterone supplementation can also be hard to stop once you start because your body will become dependent on the supplement. As described in the mechanism above, once the body detects an optimal level of testosterone in the blood, it will stop making its own natural testosterone. The boosts of energy and sex drive you may have felt while on the treatment will disappear once you stop, possibly leaving you feeling worse than you did prior to treatment until your recovers.

Some studies have also indicated an increased risk of cardiovascular issues in men who have used testosterone therapy for a long time. There are some doctors who also remain leery of the treatment for men who are at risk of or have a history of prostate cancer. If you have any concerns about your testosterone levels, please consult your doctor.

BBQ: Foods that are Healthy & Unhealthy for you this Summer