Popular
Is 5000 IU of Vitamin D Enough?
How to Boost Your Stamina and Endurance (And...
Biomanix Review – Premium Male Enhancement At Its...
What causes penile numbness and how to treat...
Why Do We Sweat?
7 Reasons Why You Should Exercise Out in...
Here’s how cannabis can improve your sex life
7 Reasons Why You Should Probably Eat More...
Male Ultracore Review – Is it worth buying?
What is Chlamydia?
Home » How the Desire for Sex Can Lead To Violence
Sex

How the Desire for Sex Can Lead To Violence

Contents show
1 Scientists believe that, within a given species, the sex that has less to do with carrying and raising offspring will compete for access to a mate who will usually be of the sex that does have the capacity to carry and raise offspring.
2 Humans are similar to many species in that women have more of an obligation when it comes to parental care.
3 Evolutionarily, it was especially important for human males to prove themselves to women.
4 Aggressive behavior in men comes with some costs.
5 Similarly, scientist have hypothesized that aggression and violence will occur when a man feels he is at risk for losing his status as socially dominant.

While it is a broad generalization to say that men are aggressive and violent, there is definitely evidence that men have a higher propensity towards violent behavior than women have. Across the entire world, for all of human history, men have tended to sometimes act violently. Men are especially aggressive towards other men, but they can also be aggressive towards women. Evolutionary scientists explain that the tendency towards violence and aggression has to with sexual selection, which is the evolution of certain traits that make it easier to find and attract a mate.

Scientists believe that, within a given species, the sex that has less to do with carrying and raising offspring will compete for access to a mate who will usually be of the sex that does have the capacity to carry and raise offspring.

While there are exceptions in a couple of species, females tend to carry and raise the offspring, so males have to compete with each other males in order to capture the attention of the females. Therefore, many male animals have different physical features and behavioral tendencies that help them to better assert their dominance in order to get the attention of a female mate. Common features include horns, antlers, bright colors, and large feathers. This accounts for many major differences in male and female anatomy and behaviors in some animals. 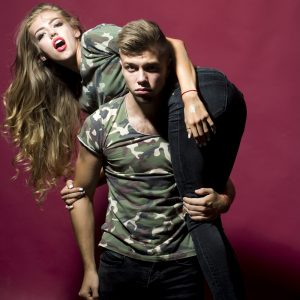 Deer, for example, have antlers only if they are male. They use these antlers to size up other deer and prove they are more dominant and worthy of a mate. Even the giraffe’s long neck is used to prove their strength to attract a mate. Scientists used to believe that the long neck evolved because it gave giraffes an advantage when it came to food access. However, scientists recently started to think their long necks have evolved because they can help male giraffes attract a mate, especially since the long neck actually gave giraffes disadvantages when it came to drinking water. It also made it hard for giraffes to eat food whenever a famine made it so that only low hanging branches and smaller trees contained food.

Additionally, if height gave giraffes some sort of advantage, scientists would expect to find an increase in the length of giraffe legs over time as well as an increase in giraffe necks. However, the fossil records have revealed that giraffe necks increased much faster over time than giraffe legs did. Therefore, evolutionary scientists now believe that long giraffe necks are a result of sexual selection. Indeed, male giraffes use their long necks to fight each other and prove their dominance. Those with the longest necks usually have an easier time finding female mates.

Humans are similar to many species in that women have more of an obligation when it comes to parental care.

While research does show that raising a child probably evolved to be a group activity for humans, there is no denying that females are the sex responsible for pregnancy and childbirth. Additionally, even if men evolved to gain traits that help them to significantly participate in childcare, men did not necessarily evolve to also lose traits that help them find and attract a sexual partner. Most sexually selected traits probably evolved before other evolutionary mechanisms that enabled men to help raise their offspring, so an increase in male childcare participation does not necessarily have to lead to a decrease in sexually selected traits unless sexually selected traits ended up proving to be a significant disadvantage.

Human men did not evolve to have antlers, horns, feathers, brightly colored hair, or long necks. However, humans do have ways of fighting each other and asserting dominance to help in ways that help men to find and attract a sexual partner. This may be why men today still have a tendency to be aggressive, especially towards other men.

Evolutionarily, it was especially important for human males to prove themselves to women. 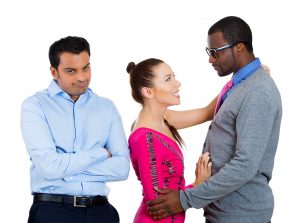 Since there are far more fertile men than there are fertile women, men had to be very competitive if they wanted to find a sexual partner and then reproduce. Additionally, women may have evolved to have high standards because they want to make sure their offspring have the best DNA, which means men have to find a way of standing out to women.

The evolution of aggressive behaviors probably occurred because aggression can be used to elevate a man’s social dominance so that he can capture the attention of sexual partners. Females are not necessarily evolutionarily programmed to be attracted to aggression and violence. However, several studies have shown that females are definitely attracted to social dominance.

Aggressive behavior in men comes with some costs.

It means you are not focusing on other survival goals and it can also lead to injury or even death. In other animals, many sexually selected traits also have disadvantages when it comes to survival, which is why these traits are only used at specific times. It is also why only one sex tends to evolve these traits.

For example, the peacock’s tail is theorized to be a sexually selected trait and, while it does enable the male peacocks to stand out to the females, it is also cumbersome and conspicuous, which makes male peacocks very vulnerable to predators. Luckily, female peacocks have a smaller tail, which better protects them and any eggs or offspring from potential predators. Because of the disadvantages associated with these huge tails, male peacocks are able to fold up their tails, which can make them somewhat less visible to predators during the times that they are not trying to find a mate.

Similarly, scientist have hypothesized that aggression and violence will occur when a man feels he is at risk for losing his status as socially dominant.

Recent studies have backed this hypothesis. Research additionally shows that men will only care about social dominance at times when they are specifically trying to compete for a sexual partner.

There are a multitude of factors can lead someone to behave in a violent manner. However, scientists believe that aggression in men evolved as a result sexual selection. This does not mean that men are necessarily violent and women are necessarily nonviolent, but it does mean that, when looking for sex, men have a higher chance of acting aggressively because of certain evolutionary mechanisms.

How to Boost Testosterone