Popular
Is 5000 IU of Vitamin D Enough?
How to Boost Your Stamina and Endurance (And...
Biomanix Review – Premium Male Enhancement At Its...
What causes penile numbness and how to treat...
Why Do We Sweat?
7 Reasons Why You Should Exercise Out in...
Here’s how cannabis can improve your sex life
7 Reasons Why You Should Probably Eat More...
Male Ultracore Review – Is it worth buying?
What is Chlamydia?
Home » Tips to Build a Better Relationship with Food
Nutrition

Tips to Build a Better Relationship with Food

The relationship which you create with food determines your ability to maintain good results and happiness while adapting your body to the composition which you desire. However, when individuals attempt to change your body composition can be restrictive and cause some certain degree of depression when these expectations are not met. As a result of this, individuals tend to eat when they are not hungry and adapt to other bad eating habits. It is important to note that the key to sustaining a healthy lifestyle is by having a healthy relationship with your food and not a relationship that is built on guilt. There are some tips which can ensure that you are on the right path to achieving healthy fitness. These tips include:

This is known to be one of the important tips to adapt if you wish to build a healthy relationship with your food. You must follow a dieting plan which is flexible and easy to adhere to. By doing this, you are bound to stick to your diet plan because it is not difficult to adhere to. A flexible diet is known to be one that includes energy to initiate your weight loss agenda. This type of diet plan does not restrict you from eating some particular type of food; rather it enables you to eat all types of food but in portions. This diet entails that you can consume any kind of food like carbs, protein, and even fat, but they must be consumed in a particular ratio to ensure that you do not exceed your daily calorie intake budget. This dieting plan can allow for the consumption of foods like pizza and ice cream but entails that they must be taken in moderation. Other dieting plans however restrict you from consuming these kinds of foods which would therefore cause a problem for your dieting plan in the long run.

It is highly suggested that you figure out your trigger foods and consume them in small amounts. If you are an individual who has a poor relationship with food, then these trigger foods are likely to leave you feeling guilty after consumption. Most at times, individuals tend to attach a feeling of guilt after the consumption of certain foods like pizza, shawarma and stuffs like that. It is important to note that the consumption of these foods is acceptable, but it must be done in moderation to not exceed your calorie intake budget.

Focusing on the Whole Picture rather Than on a Single Meal

This is another tip to possess if you wish to develop a healthy relationship with your food. When it comes to the consumption of trigger foods, we often think about dieting in some particular sector rather than thinking of it as a whole function or ideology. Most at times, when individuals consume trigger foods, they are consumed by the feeling of guilt of having failed their goals. However, this is not the case because your fitness success depends on your long term changes and not temporary ones. You mustn’t feel guilty for yourself when consuming a few trigger meals as long as you put your eyes on the main target.

Do not Guilt Your 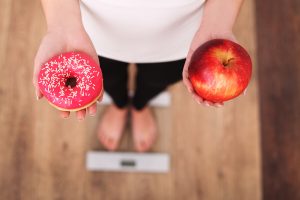 This is another very important tip when it comes to building a healthy relationship with your food. Many individuals fall off the course of their healthy living by blaming themselves when they consume a few trigger foods. Most individuals are guilty of this act and thereby destroy their relationship with food. As earlier stated, your fitness journey is not dependent on a single trigger meal that you consume. Instead of feeling guilty because of the consumption of trigger foods, you can make up for the extra calories consumed. You can make up for excess calories by exercising longer or reducing your next calorie intake.

This is a habit that is common among most individuals. This single act can destroy your relationship with your food. You must quit labeling your food as good or bad to ensure that you maintain a healthy food relationship. It is highly advisable that you quit labeling foods as good or bad and begin to consume them in portions while watching your calorie intake. There are however few food ingredients that are bad for you and should not be consumed.

Having a bad relationship with your food is not a good thing; it can cause a restriction on your diet thereby leading to an unhealthy lifestyle. However, there are tips that would aid in restoring a good relationship between you and your food, tips like adapting a flexible diet, eating trigger foods in moderation, and many more.

7 Reasons Why You Should Probably Eat More...

Types of Protein You Should Be Eating

General Nutrition Tips for the Man on the...

Eat These Foods Instead of Taking Supplements

Nutrition Tips Everyone Should Know

The Top 5 Antinutrients Which Can Negatively Impact...

What Is High Protein Bread? Is It Something...